Livio Ceschin lives and works in Collalto, a small town in the province of Treviso. 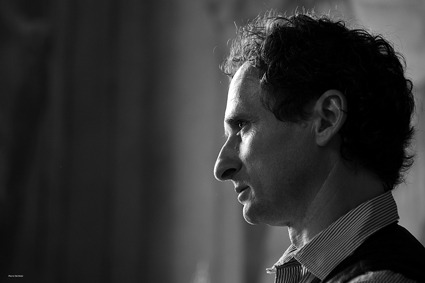 Livio Ceschin was born in Pieve di Soligo (Treviso) in 1962. In 1978 he attended the Arts School in Venice and graduated in 1982. In 1991, he started etching, preferring the aquafortis and dry point technique. His first works were copies of graphic works by Rembrandt, Gianbattista Tiepolo and Canaletto, which he engraved on zinc. At the same time, he engaged in “copying exercises” of works by Barbisan, Pitteri and Velly.

In 1992 he enrolled in the Accademia Raffaello in Urbino and attended the Copperplate Etching Laboratory run by the master engraver Paolo Fraternali (with whom he collaborated in a 2006 graphic art exhibition). Fratternali’s contribution was decisive in his approach to studying new techniques.He felt an ever-more urgent need to take on landscapes adopting the etching and dry-point techniques.

In 1994, Livio Ceschin met Renato Bruscaglia in Urbino during one of the artist’s first exhibitions at the Saletta Paolini Nezzo.
That same year he received his first award, First Prize at the “Premio Arte ’94”, Giorgio Mondadori Editore competition with “Riflessi sull’acqua” (“Reflections on the Water”).
From 1994 to 1998, many exhibitions were dedicated to his works in galleries and cultural institutes both in Italy and abroad. His most important exhibition in Italy was held at the Galleria Linati in Milan in 1998, which led to the publication of a catalogue edited by the art critic Tino Gipponi.

His friendships with poets and writers began in 1998. His first editorial work came out in January, published by the Stamperia Santini in Udine, in the art portfolio called “La finestra più alta” (“The Highest Window”). It contained a piece of prose by the poet Novella Cantarutti together with a dry-point by the artist. That same year saw the publication of a booklet edited by Fabrizio Mugnaini that included three unpublished poems by Silvio Ramat and a dry-point by Ceschin. This was followed by another, “Una poesia e un’acquaforte” (“A Poem and an Etching”), edited by the editor and poet Bino Rebellato. This edition was accompanied by a poem by Andrea Zanzotto and an etching by the artist.

From 2000 to 2002, Ceschin participated in some of the most important graphic biennial and triennial exhibitions, such as those held in Ljubljana, Cracow, and Ourense in Spain.
In 2003, the art edition “La luce del silenzio” (“The Light of Silence”) was presented at the Libreria Bocca in Milan. It contains three poems by Mario Luzi and three engravings by Ceschin; the introduction is by the poet Franco Loi.
In the month of April of the same year, the artist was awarded first prize at the VI International Acqui Terme Biennial Exhibition with the engraving “Nel sottobosco, tra betulle e foglie” (“In the Undergrowth, among Birches and Leaves”).
In 2004, he became friends with the writer Mario Rigoni Stern from Asiago. He illustrated the cover of the book “Storia di Tönle” (“Tönle’s Story”) for the Polish edition with the engraving “La stradina d’inverno” (“Small Road in Winter”). At a solo exhibition in Asiago, he presented the writer an art folder containing the engraving “Omaggio a Mario Rigoni
Stern” (“Homage to Mario Rigoni Stern”), accompanied by an essay by Andrea Zanzotto.
Amongst correspondence worthy of notice, he received a beautiful letter from the famous art historian Federico Zeri at the beginning of 1998:

“…your engravings prove to me that nowadays, in Italy, graphic art is superior to the art of painting”.

Ceschin also corresponded with the art historian Ernst Gombrich, whom he met at the latter’s house in London in the spring of 2000, and to whom he dedicated his work “Omaggio a Gombrich” (“Homage to Gombrich”), presently on display in the National
Portrait Gallery collection in London.

In 2001, he met the French photographer Henri Cartier-Bresson, to whom he showed his engravings and dedicated “L’attesa” (“The Wait”).

In 1993, he became a member of the “Repertorio degli Incisori Italiani” society in Bagnacavallo, and since 1996 some of his works have been published in the yearbooks published by the Libreria Prandi (Reggio Emilia).
He has been a member of the Royal Society of Painter-Printmakers in London since 2002. 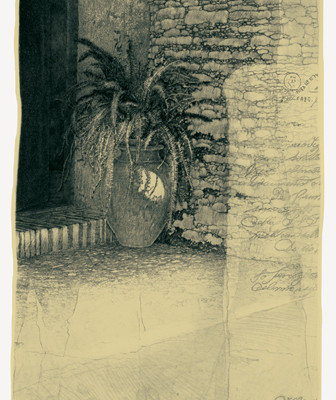 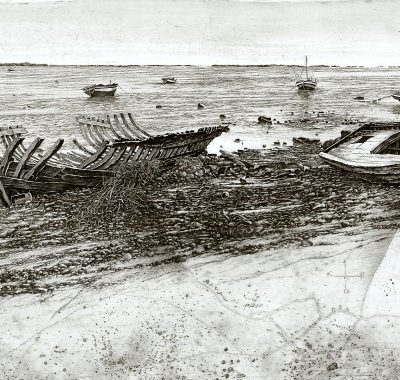 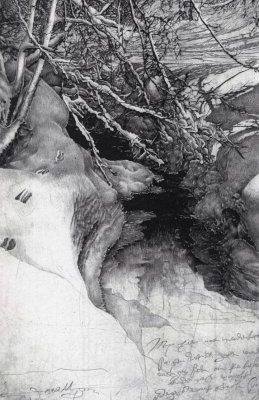