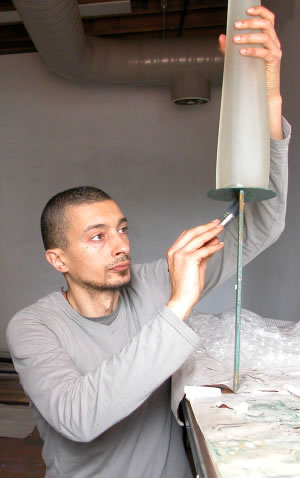 Born in Venice in 1967, after receiving a degree in Political Science from the University of Padua, Andrea Morucchio began his photographic career in 1989. In the mid-90s he produced an important body of work connected to prolonged stays in Cuba and Nepal. Since the end of the ’90s, he has expanded his own linguistic research – often based on considerations of a socio-political nature – in various directions, from sculpture to installation, from video to photography and performance. His works are preserved in the Museo del Vetro / Glass Museum (Murano, Musei Civici di Venezia), in the Museum of Old and New Art, (Hobart, Australia) and in the Provenance Collections (Tacoma, Usa). Andrea Morucchio has been the curator of various exhibitions and art projects, such as PetroLogiche (2004), dealing with issues regarding the problems caused by the Petrochemical of Porto Marghera, Mars Pavilion (2005) during the 52^ Biennale di Venezia at the Greenhouse of the Giardini di Castello, Venezia.

To approach Andrea Morucchio’s work means to enter into a somewhat disorienting proteiform creative dimension, which has formed itself along a vast horizon of investigation. In fact, for over a decade the artist has used the mediums of photography, sculpture, installation, video, and performance in a continuous experimentation of expression, experience, and sense creation. If his first medium of choice was photography, since the end of the 1990s Morucchio has shifted to plumb the depths of the spatial implications of sculpture, beginning with the production of a series of works in glass and iron (Blade and Enlightenments). The dynamic relationship between antithetical elements, a fundamental and recurring component of his poetics, is present already in these works, enabling a number of dualistic associations: glass and iron, fragility and resistance, transparency and opacity, mobility and stasis, activity and passivity.

This relationship determines those “tensions” – at times implicit, at others explicit – running through his practice, in which a sensory interest in form and the expressive power of material is never disconnected from the symbolic and metaphoric aspects.

In concert with the balanced and meditated definition of these first sculptural works – both essential and evocative – is a profound understanding of the intrinsic properties of glass.

In some ways, the search for a charge from the materials comes close to an Arte Povera-like sensibility, yet Morucchio channels this potential into rigorous and determinate forms produced with extreme precision. His long and complex process of elaboration does not reduce or eliminate the soul, rather, it seems almost to condense or to “protect” it. Thus begins a “catalogue” of almost archetypal, sacred or ritual images of strong semantic valences. They are bearers of a continuous confrontation of forces: from the luminous trajectories of the crystal wedges of the Enlightenments sculptures to the blades of glass frozen in their forward thrust by barriers of metal (Wave, 2001), to the levigated bundles of sandblasted javelins held together by the “constriction” of strips of inner tubes (Accumulo, 2002).

Interested in a development of form and matter in space – clearly identifiable in the Enlightenment series – Morucchio continues through the environmental interventions produced in 2002 at the Chiostri di San Pietro in Reggio Emilia and in 2003 in Australia at the Royal Botanical Gardens in Hobart. In fact, Percer-Voir seems to be the “environmental” evolution of the first sculptural attempts combined with an intensified search for a vaster sensorial and perceptive space that is always more interactive with the observer. The repeated choice of glass, characterizing this phase of the artist’s production, is determined by the specific properties of the material: transparency and the effects of dematerialization and dynamization caused by reflections. In fact, the title Percer-Voir, playing on the terms perceive, pierce, and see, reintroduces the linguistic, aesthetic, and ethical need to open up new possibilities of perception, of understanding, and of discerning beyond visual, sensorial or intellectual habits.
In Iconoclasm (2003), a particular property of glass takes on a strictly metaphoric sense: the ability to absorb and imprison light, making it its very essence, is used as a “visual” metaphor of the mechanisms of formation, affirmation and persistence of Totalitarian powers – nazism in primis – over the subdued masses.

The use of critical, political and social languages precisely constitutes one of the main nodes of his eclectic practice: from references to terrorist-like “supreme sacrifices”, inherent in the audio-visual installation Le Nostre Idee Vinceranno (2002), produced for the Sala Rossa of Venice’s Museo Mocenigo, to the light installation Pulse Red (Punta della Dogana, Venice), alarm warning against the risks of congestion of mass-media information, from the complex Australian multimedia work Eidetic Bush, to Laudes Regiae (2007), an installation conceived for the ex Convento dei Santi Cosma e Damiano on the Giudecca island.

With Eidetic Bush (2003), produced during his residency at the Tasmanian School of Art in Hobart, Australia, he touches on one of the region’s most pressing problems – the massive destruction of the wooded areas caused by the effects of global warming and the devastating practices of deforestation.
Not dissimilar to Eidetic Bush, is the public art intervention Pulse Red (2004), in which the artist interacts with the architecture, the history and the meaning of a site-symbol of Venice – the Punta della Dogana over St. Mark’s Basin.

Through a minimal deployment of means, he achieves results of strong scenic impact and transforms the symbolic significance of the place into its semantic modernization.</p For various nights, the Golden Globe of the Punta della Dogana pulsed with a red light, transforming the historic node along the trade route of goods and information into an alarm, that is, into a signal of the collapse of a mass media communications system which, through its pulsing, signaled its own implosion, while seemingly suffocating any kind of intelligibility.

The oscillation between different expressive means seems, at times, to insert itself into a process of creation of different programs. These progressively overlap to develop into works of complex design. Such is the case of Emerging Code – born from the interaction between sculpture and photography. Conceived in 2006, its prodromes rest in a photographic work produced in 1994 for the Gipsoteca di Possagno (Gipsoteca). A long meditation on Antonio Canova’s oeuvre, particularly the plaster works, led Morucchio to an aniconic interpretation of these same subjects. The artist concentrates on the points de repère – the means of codification for the transformation of balance and ideal beauty into marble. Emerging Code is based on the interaction between the sculptures from the Off Shoots series, where the artist’s most frequently used materials – glass and iron – return in a completely personal interpretation of Canova’s callimetry.

The dialogue with Canova’s works triggered the photographic series The Main Show (2005), in which the artist addresses spectacularization in the Catholic religion through a sequence of photo frames of the Pietà plaster model. The sculptural group is photographed from slightly different angles in each shot and the close-up horizontal arrangement of the black and white images reproduces the effect of a cinema sequence, restricting the frame around the emotional centre of the composition, thus emphasizing the drama of the subject that is, in fact, “staged”.

A formation of red frosted blown-glass helmets, produced from the mould of a 14th century sparrow-beaked celata, is arranged on the floor of the hall of the Venetian monastery, as the Laudes Regiae – the incoronation mass chorus from the Bamberg Manuscript (11th century) – plays. The reduced profiles of the Passauer Wolf – emblazoned onto medieval swords – pulsate intermittently on the wall before the helmets. The wolf alludes to man’s threat to mankind – that seemingly never satisfied instinct to overwhelm and suppress, which makes man oppressor and executioner of himself (homo homini lupus) – throughout the continuity of time and over eternally repeating history.

This last attribute is also dealt with in the audio-video projection Verso il Paese dei Fumi e delle Urla, produced in Venice in 2008 for Holocaust Memorial Day. Dozens of images of the symbols sewn onto clothing to mark Nazi concentration camp interns – Jews, homosexuals, gypsies, prostitutes, Communists – were projected onto the façade of a building in the heart of the city. The six-pointed stars and the different coloured isosceles triangle were reproduced in detail and assembled to recompose an atrocious atlas of the inhumane, of discrimination, and of violence, to the sound of passages from Nono’s Die Ermittlung. Far from the black and white images of historical memory, this patchwork of cloth presents colours, embroideries and weaves that deceives. Appearing almost innocuous at first glance, they fascinate and intrigue, just as xenophobia and discrimination continue to exist and increase in appeal.

Particularly in his video works, Andrea Morucchio analyzes themes of a strictly social and political nature. At heart are the urgent issues addressed and, for the artist, video seems to be the most incisive and direct medium: from Sabato Italiano (2004) to Talk Show (2005), to Tracciati esistenziali (2008) – articulated through the movement of a group of ants used as a metaphor for our thoughtless and hetero-directional paths of existence. 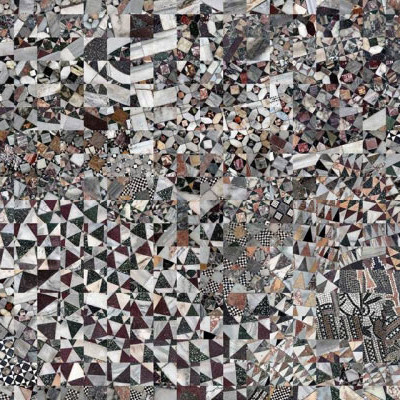 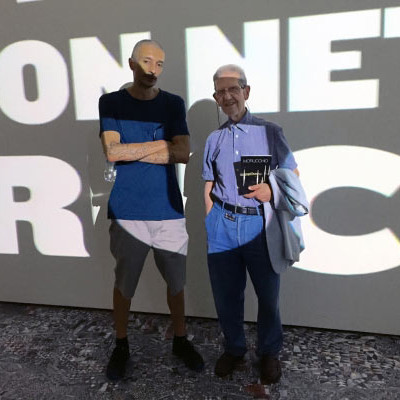 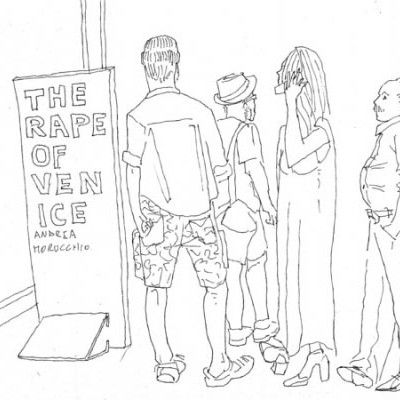 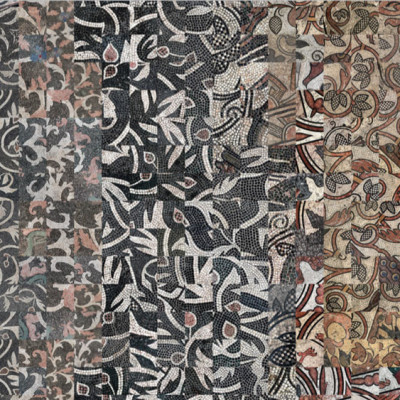