The exhibition “Livio Ceschin. Il gioco serio dell'incisione” will be inaugurated on April 18th 2013 at 5:30pm at the Museo Didattico dell'Istituto Nazionale per la Grafica (ING). The exhibition will be open until June 30th 2013: it shows almost 60 artworks by the italian etcher Livio Ceschin. 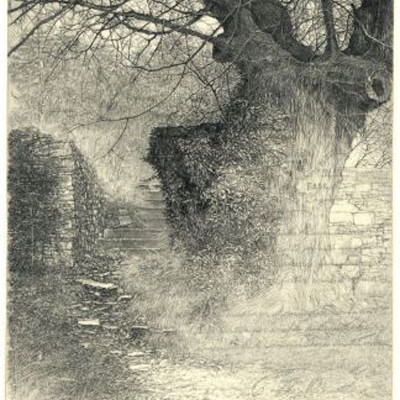 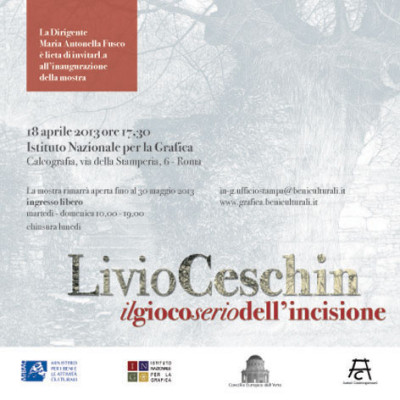 The exhibition “Livio Ceschin. Il gioco serio dell’incisione” will be inaugurated on April 18th 2013 at 5:30pm at Museo Didattico dell’Istituto Nazionale per la Grafica (ING). The exhibition will be open until June 30th 2013: it shows almost 60 artworks by the Italian etcher Livio Ceschin. Themes are different: the landscape and its lights; the portrait, with some works dedicated to Mario Rigoni Stern and Ernst Gombrich; early works inspired by classics such as Rembrandt, Tiepolo, Canaletto, Piranesi and Bianchi Barriviera. Photographs and other multimedia-materials related to the etching process will be also part of the exhibition.

Furthermore, during the Internationl Museum Day (May 18th) Livio Ceschin will hold a public meeting at the museum. As tradition of the ING, the artist will also donate his artworks, which will become part of the museum collection.
The catalogue of the exhibition titled “Livio Ceschin – L’opera incisa, 1991-2008” will be provided by Museo Didattico dell’Istituto Nazionale per la Grafica.

Livio Ceschin was born in Pieve di Soligo (Treviso) in 1962.

In 1991 he started etching, preferring the aquafortis and dry point technique. His first works were copies of graphic works by Rembrandt, Gianbattista Tiepolo and Canaletto, which he engraved on zinc. At the same time, he engaged in “copying exercises” of works by Barbisan, Pitteri and Velly.

Part of his etchings is included in some artebooks of Novella Cantarutti, Silvio Ramat, Bino Rebellato, Andrea Zanzotto and Mario Luzi. He took part in some international exhibition in Ljubljana, Cracovia and Ourense.
Livio was friend of Mario Rigoni Stern, the art historian Ernst Gombrich and Henry Cartier-Bresson. In 2002 he joined the Royal Socity of Painter-Printmakers of London.

His artworks are collected by private collectors and by some important public institutions, such as the “Civica Raccolta Achille Bertarelli” (Milan), the National Portrait Gallery of London, the Bibliotèque Nazionale de France (Paris), the Uffizi (Florence), the Staatliche Graphiche Sammlung (Munich), the Albertina (Wien).