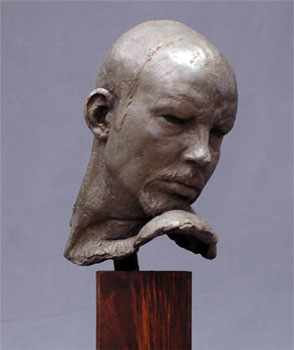 Upon completing his Master’s degree, Robert Christian Bodem was invited to return to Florence, Italy to begin the sculpture program at the Florence Academy of Art. Now a decade later under Bodem’s direction the Academy’s sculpture program thrives also being considered one of the top in Europe.
Bodem says about his work: “Nature is a great instructor and working from direct observations allows me to unlock some of her mysteries.

The forms that I am able to bring to the surface should clarify my interpretation of human relationships. To copy Nature is an impossibility, but to seek an understanding of particular human emotion, to attempt to clarify emotional content through silent sculptural form is.

I feel it is necessary to study from life, drawing on the inspiration I receive from the subject in an attempt to make poetry of the form. Ultimately, presenting the viewer with the most essential forms expanding our knowledge and ideas of how we interrelate to one another”.